Flying Nun 40th Anniversary parties are underway with Auckland’s Town Hall concert a massive fun sold out event last weekend. Wellington is coming up fast at Michael Fowler centre on 7th August, Go to Ticketmaster to secure entry … following this, the launch of the Christchurch Art Gallery massive HELLZAPOPPIN’! Exhibition on 20th August with The Bats, Mermaidens, Die Die Die, Jay Clarkson and the Containers, The Remnants ( Victor Dimisich, Terminals ….) and RDU DJ’s playing the best of Flying Nun releases.. this one is FREE

Listen to Another Door – on Bandcamp 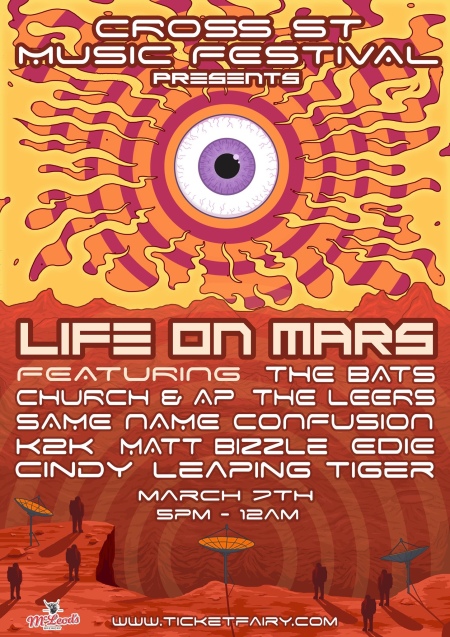 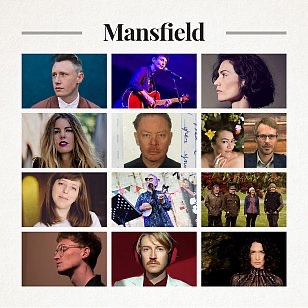 March 2019 – Bats are performing at a few NZ festivals over the coming months. First up is the Taiko Festival in Punakaiki on 27 April.

October 2018 – The Bats retreated to the foothills of Canterbury and set up a mobile studio. 15 songs were recorded for their 10th album which is having it’s finishing touches added to before release late 2019

And Flying Nun placed the album 1st in their top 11.

“The Bats are one of New Zealand’s great treasures bestowed upon the world at large, and anytime they make a record, especially one as good as The Deep Set, it’s an event worth celebrating” – AllMusic (US)
“The music is richer, expansive and deeper but maintains all the amazing pop you’d expect on a record by The Bats” – Noisy (US)
“The band’s signature sound, led by Robert Scott’s strum and Kaye Woodward’s snaky leads, remains intact and winning as ever” – Brooklyn Vegan (US)”

While The Bats were in London at the end of their UK/EU summer tour they were filmed performing Busy in the viaduct arches under London’s Haggerton station. Marc Swaddel directed, filmed and edited with additional camerawork from the practice room’s resident, Christchurch emigre, James Atkinson.

Email and possible other issues with connection to this site may happen once Vodafone decommission our isp host, Paradise on 30 November 2017. Please let us know if you can still see this by sending a message to our new email thebatsnz@gmail.com

29 May: NZ Tour was great fun – played last night in NZ at the lovely old Arts Centre Gym in Christchurch at our pre flight party. Sound was superb and a lovely bunch of people came to see us off. Thanks to Luckless – Ivy Rossiter for opening and all the good folk from the venue who were very helpful and welcoming. Flying out to Europe in a few hours – better start packing!Heavy Folk Heroes – Grant Smithies chats to BobSome great poster artwork is emerging from The Bats European and UK venues. 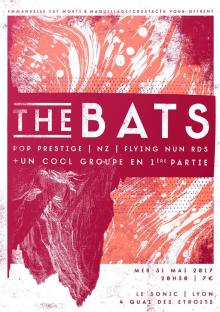 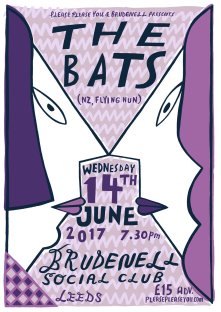 The Bats London show at The Lexington on 17th June has apparently just about sold out already. Bats London support crew are looking into a bigger venue for the night. Stay tuned for announcement on 24th March

Video – No Trace – Song written and performed by Robert Scott / The Bats
Producer – Annabel Kean
Director – Andrei Talili
Director of Photography – Scott Jackson
Editor – Joseph Harman
Starring Maeve, Otto, Hannah and Isla
Thanks to Marg and Chris for use of their lovely home.

The Bats celebrated the release of their 9th LP and 30th anniversary of their 1st LP, Daddy's Highway with tours of New Zealand, Australia, EU and UK. The EU tour started off in Lyon on 31st May through to London on 17th June. They played a good bunch of songs from both albums including many favourites from between. Key dates are on the Gigs page if you want to check. Currently editing videos and writing material for a new Bats record and no plans to tour at present. We're looking into compiling Volume 2 of our middle period releases, Fear of God, Silverbeet, Spill The Beans and unreleased material.